Jessica Simpson is keeping the details of her wedding under wraps this time. Who actually knows the details? 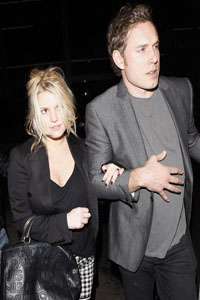 Jessica Simpson isn’t too keen on letting everyone in on the details of her wedding to fiance Eric Johnson — you can count on one hand how many people know about the specifics.

“Just me, Eric and the wedding planner,” Simpson said during an interview. We can’t really blame the singer and actress from keeping her wedding a secret this time around. The public nature of her relationship with the newly-remarried Nick Lachey is one of the reasons they broke off their marriage.

“After ‘Newlyweds,’ her life became so public that everyone thought they deserved to know everything about her,” a friend told Huffington Post writer Rob Shuter. “She is a very different person now than she was five years ago and is now making her own decisions, including who to trust and who not to share everything with.”

Does anyone know the wedding dress yet? Again, no.”Expect the dress to be as big a secret as the date,” the friend added. “Guests will be called a few weeks before the big day to give them a heads up and then called days before to give them the exact location.”

It sounds remarkably similar to Lachey’s wedding to Vanessa Minnillo.

And how about Papa Joe Simpson? He’s known for his overbearing ways, though Simpson is reportedly keeping him in the dark, too — and he’s not brokering deals with networks this time.

“No decision has been made yet,” a source told Shuter of whether or not the couple will broadcast their wedding. “However, if it does it will be Jessica, not Joe, making that decision this time ’round.”

Good thing! We can’t shake the feeling that Papa Joe’s meddling is part of what hurt her marriage to Lachey.

Are you happy Jessica Simpson is keeping her wedding details a secret?