Jordin Sparks decided to celebrate her weight loss by getting a new tattoo on her ribcage? 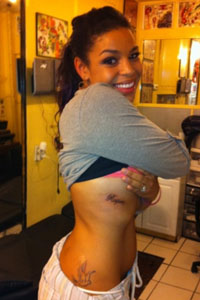 Jordin Sparks is becoming a woman before our very eyes. First, the American Idol winner debuted a new, thin figure earlier this year. Now, the singer and Broadway actress is debuting new ink!

“New tat on my rib cage…’Respira’. I love it,” Sparks tweeted this weekend. The word means “breathe” for all you non-Spanish majors. “It’s for my time on ITH, the people I met there & a reminder to take a moment when things get crazy.

ITH stands for In the Heights, the Broadway show she performed in last fall.

Whether she knows it or not, the gorgeous singer is really transforming her image in the eyes of the public. Before, she was known as this goody-goody girl who blasted Russell Brand for his sex comments at the 2008 MTV Video Music Awards.

“I just have one thing to say about promise rings. It’s not bad to wear a promise ring, because not everybody — guy or girl — wants to be a slut,” Sparks said on stage.

Now, Sparks is emerging as a slender — and somewhat sexy — woman. Her new, longer locks add to her whole look. What everyone wants to know: how did she drop the weight? She made a resolution and started working with a trainer.

“Instead of just talking about being active, I made it a priority,” she told Ryan Seacrest in May. “It was one of those things where I was turning 21 and New Year’s was coming. It was like I’m not going to start my resolution on New Year’s Day — I’m going to try to start it early and just stick to it.”

We’re lovin’ the new you, Jordin!