Darren Criss is on tap to take Daniel Radcliffe’s place on Broadway. Is he excited to return to his roots? 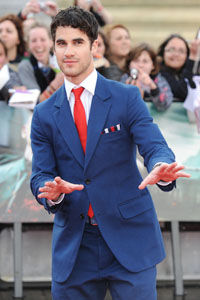 Darren Criss successfully made the transition from Broadway performer to Glee star — so why is he going back to the Great White Way? To take Daniel Radcliffe’s place as the star of How to Succeed in Business Without Really Trying.

Producers wanted Criss as a replacement from the beginning, but they figured his grueling schedule on the hit Fox show would keep him signing on.

“Daniel gives an extraordinary performance eight times a week and we knew finding someone to fill his shoes would be nearly impossible. When we learned of Darren’s dream of performing on Broadway we knew we had found our Finch but presumed his Glee schedule would eliminate any chance to work with him,” director/choreographer Rob Ashford told Broadway World. “We are ecstatic and grateful to Ryan Murphy and his Glee team at 20th Century Fox TV for helping to make both Darren’s and our dream come true.”

The Warbler played coy when he was asked about the rumors in an interview last week.

“People keep asking me about it, and it’s kind of cool that that’s out there in the world, but I cannot confirm anything at all. I mean, yeah, that would be really cool,” Criss said. “That’s certainly a wonderful role and a great show, and it would certainly be exciting to be a part of it. … But it’s definitely not confirmed by any means.”

Well, it is now. We’ll know he’ll put on a great show!

Will you take in Darren Criss’ performance on Broadway in January?