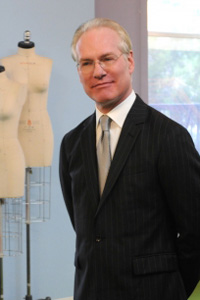 Hillary Clinton has a surprising supporter in her corner – Lady Gaga. The Born This Way singer appeared on The View this morning to defend Hillary’s choice of clothes after Tim Gunn made some insulting comments to George Lopez on Lopez Tonight.

“She’s the secretary of state…why must she dress that way? I think she’s confused about her gender, all these big, baggy, menswear, tailored pantsuit,” he said, as the audience began booing. “No, I’m really serious. She wears pantsuits that are unflattering.”

“If the pantsuit didn’t stop an inch above her ankle you could hide the cankle,” Tim Gunn continued. “I have great respect for her intellect and for her tenacity, and for what she does for our country in her governmental role. I just wish she could send a stronger message about American fashion.”

In that same interview, he said that he thinks Michele Bachmann and Sarah Palin are the same person because they are never seen together. (chirp, chirp, chirp)

When asked about Gunn’s comments on The View, Lady Gaga said: “He’s being a bully, I think. I think Hillary Clinton has more important things to think about than her hemline.”

As the crowd cheered, Lady Gaga added, “I certainly don’t. I certainly only care about my hemline.”