Jeremy Piven does a great job portraying Entourage’s razor-tongued agent Ari Gold, almost too good. But the actor insists he’s as far as can be from his caustic character, and he’s finally getting a chance to show that in Spy Kids: All the Time in the World 4D. 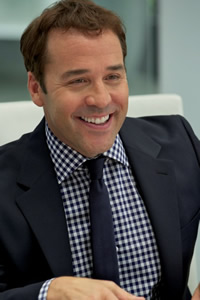 Forget the arrogant Ari you see on Entourage — Jeremy Piven is really “a softie.”

“I can talk till I’m blue in the face about how different I am from Ari,” Piven told SheKnows at the Spy Kids 4 junket. “But these characters will speak more than I could ever.”

Piven is referring to his role as the villainous Timekeeper, who despite being the bad guy, has a softer side too.

“My character is doing everything he can to go back in time to spend time with his father, and he gets very emotional,” said Piven. “My father passed away, and I’d love to go spend more time with my father.”

Some family members he does spend a lot of time with, though, are his nieces.

“I have a real shot of impressing my nieces and that’s one of the real reasons that I did this movie,” said Piven. “I’ve never done anything cool so this could be the chance to kind of get them in my court. If I can get them to laugh, it will mean everything to me.”

So we had to ask: between kids on set and kids close to home, is Piven ready for kids of his own?

He says hanging out with Spy Kids stars Rowan Blanchard and Mason Cook was the most fun he’s ever had on set.

“I ran for the set every day,” said Piven. “Everything I’ve done in my life has led me to this… that I should be doing a movie like this. At this point, I should be working in front of a green screen or playing children’s parties or Bar Mitzvahs. That’s where I’m at right now.”

In the meantime, you can catch Jeremy Piven on the last season of his successful HBO show. You just might change your opinion of his character Ari as well.

“I’ve been playing this character who’s so abrasive and offensive, but he does everything for his wife,” Piven told SheKnows. “You think he’s a pig, but he’s monogamous. I’ve gotten to play the duality of that for all these years and now I get to reveal that this character has a soul whether you want him to have one or not.”

And although Piven will be thrilled to make the inevitable Entourage movie, he told us he’s happy right now.

“It’s the best season I’ve had and you can’t ask for anything more,” said Piven. “If it continues, then we’re blessed.”

Spy Kids: All the Time in the World 4D hits theaters Aug. 18th.