Lindsay Lohan invited New Zealand’s On the SkyCouch with Rico into her Venice home while on house arrest to talk about everything from Kim Kardashian to the paparazzi. Get the highlights and watch the interview here!

Lindsay Lohan invited her furry friend from down under, Rico, into her Venice home while finishing up her 35-day house arrest for misdemeanor necklace theft. The interview was for the new Web series for Air New Zealand‘s YouTube channel. 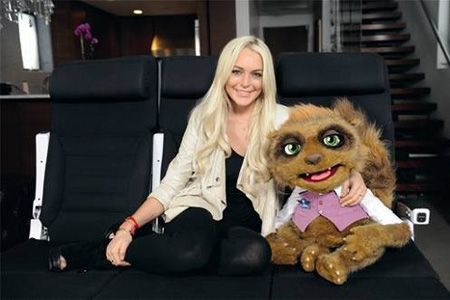 Interestingly enough, the same day this interview was filmed, Lohan cancelled her interview with Today’s Show Matt Lauer after her urine test came back positive for alcohol. It looks like furry little Rico out-scooped Matt Lauer!

Wearing a white cardigan, leggings and boots, Lohan sat down with Rico and, when asked if she had ever been to New Zealand, she said she would love to take a trip there.

“Yes, I do I love to travel,” she says. “I have not been to New Zealand, but I would love to go. It has great beaches and I have friends that live there.”

When Rico asks if she is friends with Kim Kardashian, Lindsay says that she is “very pretty.”

Rico goes on to say that she and Kim Kardashian have a lot in common, with the paparazzi following them everywhere, taking pictures of Lohan shopping and “kissing lady friends,” which made Lohan laugh nervously.

At the end of the interview, Rico gives Lohan a box with two necklaces in it. He said he heard she “love the jewelry” and reassures her, “Don’t worry, they are all paid for.” Love it!

In addition to Lindsay Lohan, Rico let David Hasselhoff lay on the SkyCouch and is planning on interviewing Giuliana Rancic later this summer.