Nick Lachey’s rep says there’s no news to report regarding a new album, but that doesn’t mean he doesn’t love to sing. 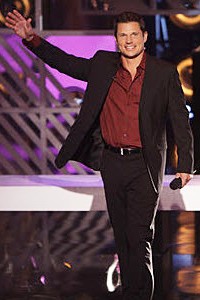 Nick Lachey may love to sing, but a new album isn’t due anytime soon.

Despite a report in People magazine that he’s headed into the recording studio following his marriage and honeymoon to actress Vanessa Minnillo, his rep confirmed with SheKnows.com that there is no news as far as an upcoming album from Lachey.

“Singing has always been my love,” Lachey said to People.

Still, we get a sense that something musically is coming down the line from the former member of 98  Degrees. Yet, Lachey probably has his hands full at the moment, with his new marriage and his hosting of NBC’s The Sing-Off, which premieres Sept. 19.

He also has plans to sneak onto the set of Minnillo’s ABC show Wipeout!

Lachey, whose previous marriage to Jessica Simpson was famously chronicled on MTV’s Newlyweds: Nick and Jessica, is in his comfort zone with Minnillo.

“It doesn’t feel any different, which I think is a great thing — I think that means it was good to begin with,” said Lachey, 37. “We’re just very comfortable and happy in our life together, so now we are back to work and back to the routine.”

Lachey’s last album, What’s Left of Me, was released in 2006. He has dropped a few singles since then, his last being 2009’s All In My Head.