Kings of Leon have canceled the remainder of their U.S. tour just days after lead singer Caleb Followill walked off stage in the middle of a concert. 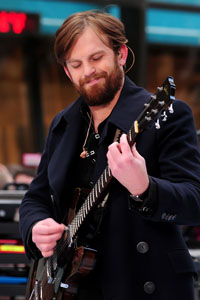 Just days after Caleb Followill walked off stage never to return at a Dallas concert, Kings of Leon have announced they are canceling the remainder of their US tour.

The band’s rep issued a statement confirming the news. “We are so sorry to say Kings of Leon are canceling their entire U.S. tour due to Caleb Followill suffering from vocal issues and exhaustion,” he said.

“The band is devastated, but in order to give their fans the shows they deserve, they need to take this break. Unfortunately, the U.S. dates cannot be rescheduled due to the band’s international tour schedule.”

Caleb’s bandmate and brother Jared Followill hinted at deeper problems after the concert when he tweeted, “I love our fans so much. I know you guys aren’t stupid. I can’t lie. There are problems in our band bigger than not drinking enough Gatorade.”

Those problems must be Caleb’s “exhaustion,” which in rock terms is generally code for anything from a nervous breakdown to too much blow.

The band’s rep says all ticket money will be refunded.

read on for more kings of leon

Which royal rockumentary is coming to Showtime?

Gwyneth Paltrow rocks out to Kings of Leon in London

No love lost between Ryan Murphy & Kings of Leon