Rosie O’Donnell says she plans on revealing more of her personal life on her new talk show on the OWN network — and apparently she plans on starting now. Find out what Rosie says about her painful divorce and her pharmaceutical excuse for eating cupcakes. 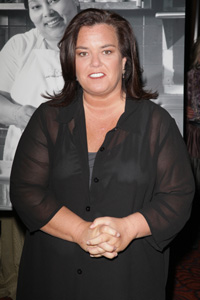 Rosie O’Donnell is gearing up for her new talk show on Oprah’s OWN network, which will debut Oct. 10 at 7 pm. The talk show veteran revealed she was excited that The Rosie Show would be on OWN after being turned down from several networks.

“I think by doing a little bit of a behind-the-scenes incorporated in the new show, you’re going to get to see how it feels like to be 50 years old, moved to another city, to be divorced — which I never thought I would be — to have one child living with me and another child living at school,” says Rosie, who split from her partner Kelli Carpenter in 2009. They have three adopted children together — one is Kelli’s biological child.

“It wasn’t what I thought my life would be and I think that’s the truth for most people who are 50…I didn’t expect these kinds of turns. [You’ll get] to see how that has evolved for me since you have known me publicly in the pop culture kind of way since my early 30s,” she told the Television Critics Association on Friday.

Will the audience relate to Rosie? “I am more the audience . . . no one is at home going, ‘If I could only be Rosie O’Donnell, an overweight lesbian who yells too much,'” Rosie joked.

Speaking of being overweight, Rosie says she blames her anti-depression drug, Effexor. “And there’s the modern medicine miracles of Effexor, which I’m proud to say I’m on,” she reveals. “It does really help keep the weight on and I keep taking it because I keep saying, ‘Well, it’s the Effexor. Can I have another Sprinkles cupcake?'”