Rockers Kings of Leon cut short a Dallas concert on Friday after frontman Caleb Followill puked — but it sounds like the band has even greater ills.

Caleb Followill left the stage 50 minutes into a Kings of Leon concert in Dallas Friday night, complaining about losing his voice due to the heat and suffering nausea — but his brothers and bandmates say that’s not the only illness afflicting the band. 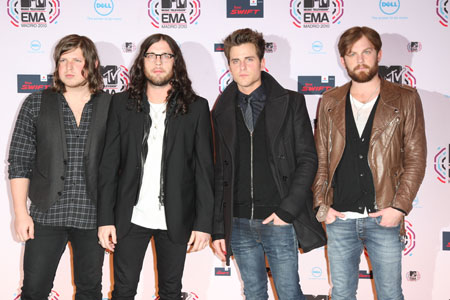 After Caleb never came back, his brothers and cousin apologized for him.

Jared Followill shed light on some darker issues within the band later that night when he wrote about the incident on Twitter.

“Dallas, I cannot begin to tell you how sorry I am,” Jared tweeted. “There are internal sicknesses & problems that have needed to be addressed.”

“I love our fans so much. I know you guys aren’t stupid. I can’t lie. There are problems in our band bigger than not drinking enough Gatorade,” he added the next day.

What is going on with these guys? Rumors of Caleb’s growing problems with alcohol have been getting louder and louder for months, even in the wake of his recent marriage to model Lily Aldridge. Let’s hope a cliché rock star addiction is not the root of this band’s troubles.

read on for more kings of leon

Which royal rockumentary is coming to Showtime?

No love lost between Ryan Murphy & Kings of Leon