MTV just turned the big 3-0 and boy has it changed. The network has gone from Michael Jackson’s Thriller to Jersey Shore’s Snooki in a matter of three decades. Let’s take a look at five of the brightest and best shows we lost but want back! 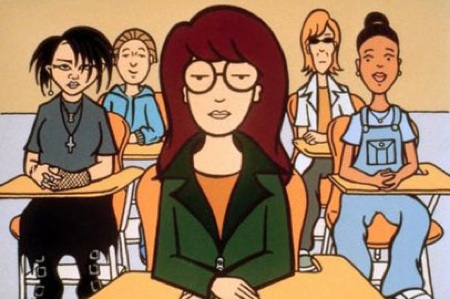 Today’s MTV is a shadow of its former self. Music has taken a backseat and reality TV is king! Before Jersey Shore and Teen Mom dominated the airwaves, MTV had a diverse roster of awesome shows to choose from. Lucky for us, the network recently decided to revive their ’90s classic Beavis & Butthead (slated to air later this year) and it’s given us a glimmer of hope.

If we had the power to reboot five shows from MTV’s golden age, they would include the following oldies but goodies.

How can you bring Beavis & Butthead back without Daria? She was the sardonic teenager, whose high school life we followed for five seasons before she went off to college in 2002. Daria was smart, witty and 10 times more relatable than any of the girls on Jersey Shore. Can we have her back?

Undressed was a soap opera that mostly highlighted college kids and their clumsy sexual experiences. On the surface you might think, “eew” but in reality the show was nothing more than an entertaining take on sex education. Maybe if they kept it on the air longer Teen Mom wouldn’t exist right now?

Every afternoon, Carson Daly and his microphone would come into our living rooms and countdown the top 10 videos of the day. Not only did TRL highlight music, but it also featured interviews from movie and TV stars. Who can forget when the cast of Mission Impossible 3 came to visit? It was pandemonium.

Before there was Twitter, there was MTV’s Fanatic. It was a program that allowed diehard fans to get up close and personal with their favorite celebrities. It was like an intimate date but with cameras and a boom mic hovering between you and your idol. We’d love to see that softer side of celebrities again.

Clone High was one of the funniest animated shows MTV ever produced. It centered on a group of high school students that were teen versions of Abraham Lincoln, Cleopatra, John F. Kennedy, Joan of Arc, and Gandhi. The show was hilarious and it exposed viewers to some of the most revered men and women in history. Once again, this was back when MTV tried to educate us under the radar.

If you had the chance, what show would you put back on MTV’s schedule?