Justin Bieber and his girlfriend are still together despite a breakup rumor over the weekend. 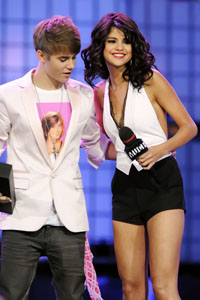 Sorry Beliebers, but your dream boy is still off the market. Despite the rumors that Selena Gomez broke up with Justin Bieber over the weekend because he was busted texting his ex, the couple is still going strong.

Bieber was spotted in Florida, not coincidentally where Gomez is currently performing during her summer tour. On her part, Gomez and her gal pals hit up Harry Potter Land and downed some butter beer.

Apparently he has heard the rumors; to prove them wrong he rocked a t-shirt bedecked with artwork from her album, When the Sun Goes Down.

And to really drive the point home, Justin Bieber professed his undying love and admiration to Selena Gomez on Twitter.

“What makes you so beautiful is that you dont know how beautiful you are… to me,” he tweeted.

Sorry girls: Justin Bieber is still off the market.

Justin Bieber & his dad have Jesus on their side