Fantasia Barrino has happy baby news to share and she wants everyone to take note that this time she won’t be keeping her pregnancy a secret! 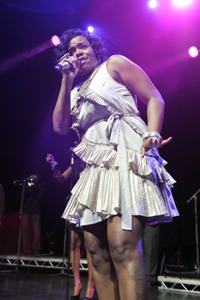 Fantasia Barrino is pregnant and not afraid to tell you about it! In a performance for charity on Sunday the singer announced her happy baby news. Lucky you, we’ve got the video here to watch!

“You are the first [people] that I share this news with,” a pregnant Fantasia Barrino told the crowd Sunday. “And I share this with you because I can relate to you.”

Fantasia Barrino, pictured here in early June continued, “And for a while, I walked around figuring out what they will say and what will they think about me. But now I tell you, I don’t live my life for folk.”

“So, this child that I carry — God has given me this child,” the 27-year-old concluded before belting out a song for her baby-to-be. “And I don’t have to hide it from none of y’all.”

During Fantasia Barrino’s pregnancy announcement there was no mention of who the baby daddy is. The singer has been romantically linked to Antwaun Cook, whom she started seeing when he was married.

The couple’s relationship became tabloid news when Fantasia Barrino was taken to court by Antwaun’s ex-wife Paula for breaking up their marriage. The singer claimed not to have known Antwaun was married at the time and also revealed she had become pregnant by him but chosen to have an abortion.

In August 2010, Fantasia Barrino overdosed on pills in an apparent suicide attempt.