Of course, Anna Paquin and Stephen Moyer were just teasing. It can’t be easy to have every eye watching your romance both on and off screen, but the newlyweds, who celebrate their one-year anniversary Aug. 21, just have fun with it, while offering a few real tidbits. 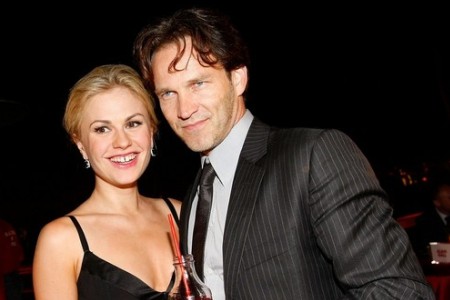 SheKnows: Any plans for the big day next month?

Anna Paquin: Did we get married?

What do you two like to do together as a couple?

Paquin and Moyer on TRue Blood

Do you two miss working together?

Moyer: It can be one of those things where you get home and the other one’s at work, or if I’m working, Anna’s at home. Truthfully, we got to know each other on set and all the crew knows us together, so they tell us they miss it. They’re probably lying. 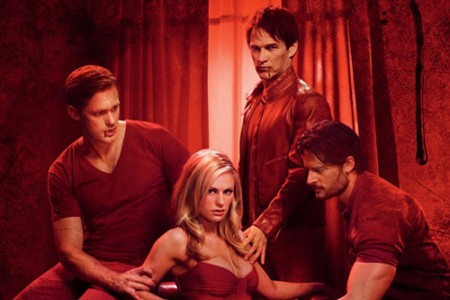 With so many men in Sookie’s life on True Blood, do you ever find yourself rooting for one of them?

Paquin: It would be weird to decide what I want to come for her, because then when it doesn’t –because it probably won’t ever match up with what I envision — then I’d be disappointed. We’re all kind of going with the flow.

What’s more important in a guy: Good oral hiegene, like a vampire, or good grooming, like a werewolf?

Paquin: Do you think the werewolves have good grooming? Did you see the boys at Lupine’s? Blech. More importantly, if you’d been there, you could have smelt the boys at Lupine’s. Alcide (Joe Manganielle) is a unique and rare werewolf in that he seems to pay close attention to his grooming. The others are like cool biker dudes who don’t know about deodorant.

What do you do during downtime on set?

Moyer: It can be a fun place to be. There was a photograph of us last season, about two weeks from the end, and it’s both of us just head down on the internet. There’s a bit of surfing going on. HBO GO is a fantastic way to spend your time.

When you have time off at the same time, what is your ideal getaway?

Moyer: A quick 10 minutes in the trailer.

Um, I meant a couple days or a week.

Paquin: A loooong two weeks in the trailer. [Laughs.] We love to get away.

Moyer: Getting away is one of our indulgences. If there’s any possibility, if we see a three-day window coming up in our schedule, we are off.

With all we’ve heard about you over the years, what would surprise fans most about you two?

12 hrs ago
by Elisa Lewittes

14 hrs ago
by Elisa Lewittes