Crystal Harris is trying to explain her comments about Hugh Hefner’s sexual prowess. Did she really apologize?

Crystal Harris likely wasn’t expecting the backlash she received when she told Howard Stern that her ex Hugh Hefner lasted “like two seconds” in bed. Everyone rallied to Hef’s side after her nasty comments, including the Playboy founder’s former Playmate girlfriends. 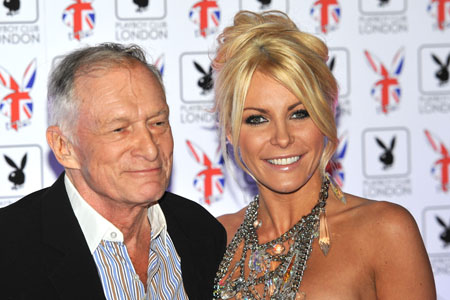 Now, Harris is apologizing for her words… sorta.

“The Stern interview scared me, he’s harsh,” Harris tweeted Thursday night. “I was unprepared and blurted out things I shouldn’t have said, I’m sorry.”

Hefner, 85, must really care for his former love — he accepted her apology.

“I think Crystal told Howard Stern what he wanted to hear,” the world’s most famous magazine founder told a fan on Twitter. [Her original comments] didn’t have much to do with reality.”

He previously blasted his ex on Twitter before deleting the messages.

“The sex with Crystal the first night was good enough so that I kept her over two more nights,” he wrote. “Crystal lied about our relationship on Howard Stern but I don’t know why.”

“I don’t blame Howard,” Hefner continued. “Crystal shouldn’t have been booked on the show at this sensitive time.”

The biggest question in all of this: Is Harris really 25? She looks like she’s pushing 40.

Do you think Crystal Harris is sincere in her apology?