The Entourage posse came to the TCA Press Tour to talk about their final season, but all anyone wanted to hear about was Entourage, the movie. Nothing is written in stone or even in the air, but exec producer Mark Wahlberg and show creator Doug Ellin are ready to make it happen.

“If I had to finance it myself, I would do it,” Mark Wahlberg revealed. “I certainly hope that this has a chance to become a feature film. People have always complained that the episodes are too short, and they want to go on a journey with these guys, so I’ve been telling Doug and everybody for a long time. 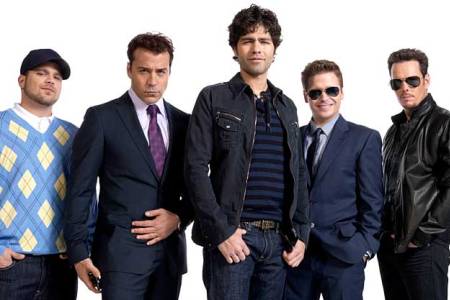 “The Hangover, to me, is very much like Entourage,” he continued. “And look at the success of rated-R comedies this year.”

Doug Ellin, the man who created the show, also says there’s life after HBO. “We’re going to do a movie, especially if E signs Mark,” he quipped, intimating that he wants to get Whalberg in with his cast. “It’s a question of when and how quick. And hopefully we’ll sit down and come up with an idea and make it happen.”

“We are all choked up,” Adrian Grenier panned. “Truthfully, we’ve been together for eight years. We’ve spent countless hours, weeks creating something that we are all very, very proud of. It’s not only sad to say goodbye to each other, but also what we’ve created.”

While there were no straight spoilers given out about how Entourage the series will close, Ellin promises no major deaths or groundbreaking events, while Jeremy Piven feels the end on HBO certainly leaves room for a next life on the big screen.

“This season feels like our best, and it’s so gratifying to finish this way,” Piven said. “This character I’ve been playing for eight years has been such a reactive character and takes up the oxygen in the room. Ari makes this emotional transformation. It’s incredible to finish like this, and yet I think it will be gratifying for people to see it, and yet we’ve left ourselves in a position where, organically, we could transition into a movie, or not. It sure has been an amazing ride.”

Do you agree? Would Entourage, the movie, be anything like The Hangover?