Olivia Wilde’s nipples have caused quite the commotion on the set of the upcoming film The Change-Up. Here the actress details what happened that led her to sit in on the approval process for her nipple stand-ins. 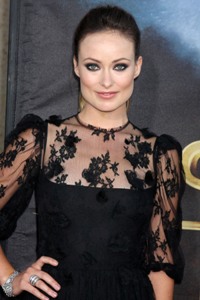 Olivia Wilde’s nipples are not to be missed in the upcoming The Change-Up. Not for their authenticity of course, but for the appreciation of CGI effect!

Turns out when Olivia Wilde made the decision to wear pasties during a nude scene with co-star Ryan Reynolds she caused a hiccup. Upon review of the film it became obvious the actress wasn’t really nude, causing film-makers to reach into their bag of tricks and pull out faux nipples.

To complete the sex scene between Olivia Wilde and Ryan Reynolds producers used CGI (computer generated imagery) effects to add in the missing details, a process the Cowboys and Aliens actress had the bizarre honor of sitting in on.

Olivia Wilde tells the Toronto Sun, “I wasn’t actually naked but now appear to be naked because… in that scene Ryan Reynolds is supposed to be covering them (with his body) and he moved and so the pasties were in the movie and so they had to paint in nipples using CGI.”

She continued, “And I got to approve the nipples! They sent me an email saying, ‘Please review nipple cover shot one through seven and decide which one is most like the original.’ I don’t know what he (the producer) was using as source material… but I think it’s pretty close.”

You can see Olivia Wilde in a trailer for The Change-Up here, but your faux nipple detection skills will have to wait until August 5, when the film is scheduled to be released.