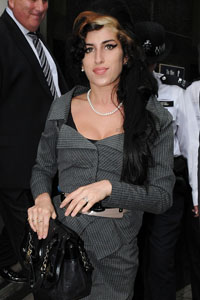 Amy Winehouse is gone, but a handful of her fans now have her clothes.

Mitch Winehouse, Amy’s father, handed out some of the singer’s clothes and personal belongings to a crowd of fans outside her London apartment on Thursday, according to British newspaper The Sun.

“These are Amy’s T-shirts,” Winehouse said. “This is what she would have wanted — for her fans to have her clothes.”

The elder Winehouse also unloaded Amy’s sunglasses and other items, but he kept her guitar and notebooks.

The clothes “were very small in size and skinny, like her figure,” said a male fan at the scene.

Mitch Winehouse distributed the items after he, Amy’s mother Janis, brother Alex and boyfriend Reg Traviss went to the apartment to collect some of her personal belongings, according to MTV.

Family and friends convened Thursday night at a Jazz After Dark club in Lonson, a favorite of Amy’s, to celebrate her life. Attendees included her parents, Traviss, Kelly Osbourne, Eliza Doolittle and Mark Ronson.

Amy Winehouse was found dead Saturday, July 23 in her London apartment at the age of 27. An autopsy report was inconclusive in establishing a cause of death. There is a report that Winehouse might have reached out to addiction specialist Dr. Drew Pinsky before her death.