Did Amy Winehouse reach out to Dr. Drew for help before her death? Read on to find out more. 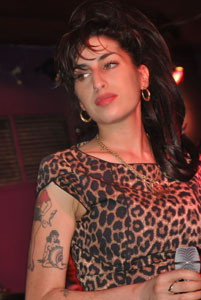 Dr. Drew Pinsky says he believes Amy Winehouse tried to reach out to him for help before she died last week — and the source of that information is one of the Celebrity Rehab star’s past patients, Janice Dickinson.

“I found out also yesterday that, believe it or not, she was trying to contact me, which was weird,” Dr. Drew said during a radio interview Thursday.

“Janice Dickinson told me that,” Pinksy explained. “I remember getting calls from Europe and thinking ‘What the hell is this?'”

His rep chimed in. “Janice Dickinson told Dr. Drew on his HLN show last night that she had given Dr. Drew’s number to someone in Amy’s camp,” said Dr. Drew’s rep. “That was the first we heard of this. No contact was ever made between Amy and Dr. Drew, although he did get a missed call from an international number that he did not recognize. We can’t be sure who made the call and no message was left. Janice is really the source for the story.”

Dr. Drew thinks the claim that Winehouse’s parents are spreading that Amy Winehouse died of alcohol withdrawal is bunk.

“Just this morning, her parents put out some type of news release that suggests that what they believe she died of was alcohol withdrawal, which is a very interesting little theory,” Dr. Drew said. “It’s wrong, it’s not what she died of, I can virtually guarantee you, but it’s an interesting reminder to all of us that alcohol is the only drug from which the withdrawal is commonly fatal.”

“It can kill you… but it kills you, it sort of… you go down in a ball of fire. You get really, really sick and you seize and you become encephalopathic and confused and your heart becomes erratic and it’s not like you just drop dead like her parents are suggesting,” Dr. Drew added.

Amy Winehouse’s autopsy was inconclusive; toxicology results are due in the next few weeks.