Kirstie Alley took David Letterman to task for years of fat jokes at her expense. 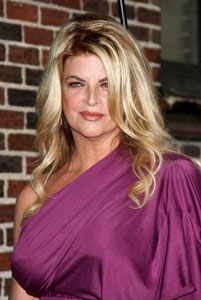 Kirstie Alley has a great sense of humor, and she showed it last night when she good-naturedly reamed David Letterman for all the fat jokes he has made about her.

“I thought you loved me madly and then you talked about me being sort of chub,” Alley said to the Late Show host.

A newly slim Alley then took out a written list of some of the worst offenders and started reading.

“Kirstie Alley is joining Dancing with the Stars,” the actress said. “If you don’t already own one, now might be a good time to get a wide-screen TV.”

“Last night on Dancing with the Stars, Kirstie Alley fell on the dance floor. …How many of you felt it?” she continued. “However, the judges scored her an 8 — on the Richter scale.”

“We do love you, and if you were skinny we would tell jokes about you. … Ehh, probably not,” he said.