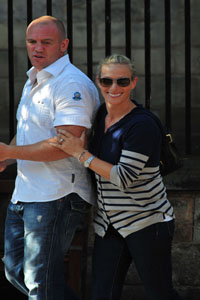 The excitement throughout Britain is palpable: Another royal wedding is happening! Queen Elizabeth’s granddaughter, Zara Phillips, is set to marry England rugby star Mike Tindall this weekend in Edinburgh, Scotland.

The nation hasn’t been this excited since… April. You know, that’s when that Prince William married Kate Middleton in a small, private ceremony.

The couple arrived early Friday at Canongate Kirk in the city’s Royal Mile to rehearse for their Saturday nuptials. The atmosphere was decidedly more relaxed than Will and Kate’s wedding — Phillips arrived at the church in casual jeans and a sweater.

Phillips has been indulging in expensive beauty treatments, though — she’s spent the past several days at a £475-a-night country house hotel getting organic facial and scalp treatments.

It’s good to be a royal.

Phillips, the daughter of Princess Anne and her first husband, is widely considered to be one of the most approachable and down-to-earth of the royals. She’s routinely spotted on the streets and is an accomplished equestrian. One sad bit: She doesn’t have a royal title.

Tindall better be on his best behavior on his wedding day. The Daily Mail said that the private ceremony will mark the first time the 32-year-old will meet the Queen and other members of the royal family.

Do you care about the royals if it’s not about Prince William and Kate Middleton?