Debbie Gibson and Tiffany are kicking off their Journey Through the ’80s tour tonight in New York. To celebrate, the pair performed on Good Morning America. 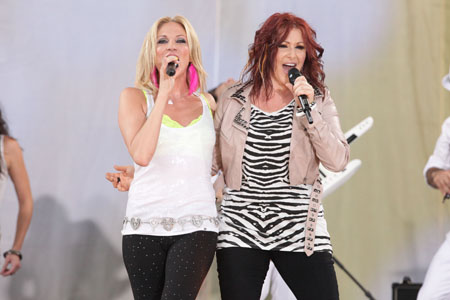 Gibson sang the hit that made her famous, Only in My Dreams, while Tiffany got down to a country version of her hit I Think We’re Alone Now.

By the way, how ridiculous is Debbie Gibson’s body? She looks better today than she did at 16!

The pair also performed Don’t Stop Believin’, We Got the Beat and What About Love.

What have these two teen dreams been doing all these years? Debbie — who actually prefers to go by Deborah Gibson now, thanks — has enjoyed a successful career on Broadway as well as releasing several adult contemporary albums. Tiffany has also stayed busy releasing new music and appearing on reality shows like Celebrity Fit Club.

Check out Debbie Gibson and Tiffany on GMA: