David Beckham’s got babies on the brain these days, thanks to his new little baby girl. Will they try for number five?

Baby Harper Seven Beckham is about three weeks old, but David Beckham revealed that they wouldn’t object to another baby. 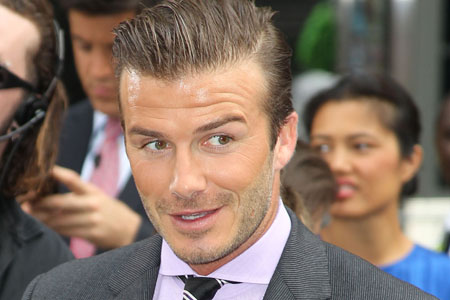 “If we’re lucky enough, we hope to have one more,” Beckham told Extra. The addition of baby Harper brings the Beckham clan to six — she has three brothers, 12, Romeo, 8 and Cruz, 6.

Why stop at one more? We think Victoria Beckham need at least three girls to compete with the three boys.

“It’s different having a little girl, she’s elegant,” the clearly smitten soccer player continued. “All the boys won’t leave her alone, which is amazing. Can’t wait to get home to see her.”

Talk about adorable. Beckham stole our hearts when he posted a picture with his baby girl, but this just made us melt. Sure, the sexy soccer stud is gorgeous, but he’s happy the baby has her mother’s nose.

“Thankfully,” Beckham laughed. But, doesn’t he like his nose? “Yeah, but she’s got a better one.”

We’re pretty sure this little lady is going to be one of the most adorable — and spoiled — little girls in the world.

Victoria Beckham: I want Harper to be just like Kate Middleton
Justin Bieber planning a private concert for the Beckham kids
Get in David Beckham’s underwear — for a price