Warner Bros has released a new trailer and poster for George Miller’s highly anticipated sequel [em]Happy Feet Two[/em]. Both Elijah Wood and Robin Williams are back and cutting a rug alongside a few new A-list voices. 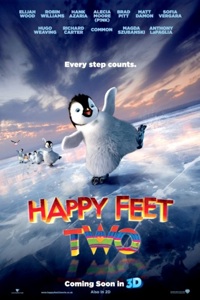 Happy Feet Two shifts the focus from Mumble (Elijah Wood) The Master of Tap, to his son Erik (Elizabeth Daily), the raging “choreo-phobe.” The young penguin has no desire to be the next Lord of the Dance, so he runs away leaving his dad in a tizzy.

The adventures of Mumble, Erik and his buddy Ramon (Robin Williams) are just a tip of this movie’s iceberg (pun intended). The group encounters a slew of new and strange characters including an eccentric penguin called The Mighty Sven, who has a rare and amazing gift – he can fly! How can The Master of Tap compete with that?

On an interesting side note, the film also stars Sofia Vergara and Hank Azaria, who both appear in The Smurfs movie. Coincidence? We think not!