Travis Pastrana crashed huge at the X Games Thursday, putting an end to his NASCAR debut. 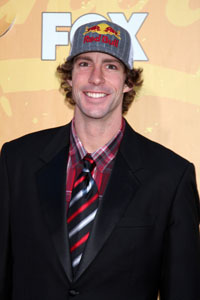 Moto champ Travis Pastrana was trying to win the Best Trick competition at X Games 17 in Los Angeles Thursday with his new trick the TP Roll when he lost control on the landing and crashed hard, breaking his right foot and ankle. Ouch!

Pastrana had been practicing the move for five years before he whipped it out at X Games.

While crashes and broken bones are par for course for extreme athletes, this one is hurting Pastrana a little more than usual. He had to withdraw from the rest of the X Games and has canceled his scheduled NASCAR debut tonight in the Nationwide Series.

“I am sorry this happened and will be back in action as soon as I can,” Pastrana told ESPN.

Pastrana attempted the trick three times, aborting his first attempt, crashing on his second and crashing even harder on the last — when his leg was pinned between the ground and his bike.

“Like fans everywhere, we were so excited about Travis’ debut Saturday night,” Pastrana’s NASCAR team owner Michael Waltrip says. “We have a long-term vision with Travis, which includes lots of NASCAR. We can’t wait to get him healed and in our race cars.”

“We talked to our sponsor Boost Mobile and agreed to withdraw from Indy and delay our debut. We’ve waited a long time for someone like Travis Pastrana. I guess we’ll just have to wait a little bit longer,” he adds

Check out the video of Travis Pastrana crashing at X Games 17:

31 mins ago
by Daisy Maldonado