Michael Douglas was photographed holding what appeared to be a cigarette in his mouth. After beating throat cancer months ago, could the star be risking his health again? 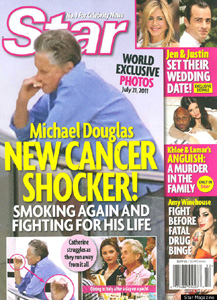 Michael Douglas underwent chemotherapy and radiation last year after being diagnosed with Stage 4 throat cancer. Months after his grueling treatments, Michael Douglas had reportedly beaten throat cancer and has been spotted recently looking much healthier.

Michael Douglas told David Letterman in an interview in August 2010 that he had a habit of smoking and drinking, both which contribute to throat cancer. He has also told the media that stress also contributed to his cancer diagnosis.

Now that he is cancer-free, Douglas may have returned to his unhealthy ways. Star Magazine snapped photos of Douglas puffing on what appears to be a cigarette. They report the 66-year-old started smoking as soon as his wife, Catherine Zeta-Jones, went on shore.

It could possibly be a smoke-free electronic cigarette, or Smoke Stick — however one source says you can see smoke coming out of his mouth. Perhaps medical marijuana?

Catherine Zeta-Jones has also been spotted smoking recently, causing many to wonder about the effects of secondhand smoke on his condition. Zeta-Jones is reportedly trying to quit her smoking habit, favoring electronic cigarettes instead.