The Bachelorette said goodbye to Ryan Park twice this season, but the happy-go-lucky guy isn’t letting that stop him from defending Ashley Hebert against critics.

We’ll be the first to admit we weren’t completely sold with Ryan Park and Ashley Hebert’s romance on The Bachelorette — mainly because he’s too happy all the time! 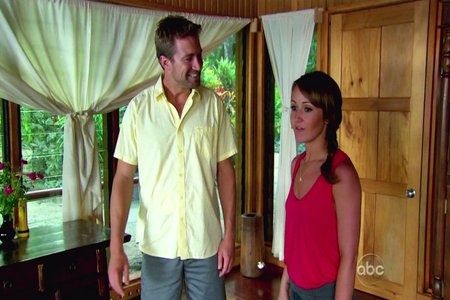 After a recent interview conference call with reporters where he came to the defense of Ashley Hebert, we’re starting to think maybe he really is all unicorns and rainbows — all the time.

What prompted him to speak out against critics who feed on Ashley Hebert’s sometimes questionable choices? We hate to say his name, but it was, of course, Bentley Williams. “Being the Bachelorette is hard!” Ryan Park said. “It’s unfortunate she’s being attacked for her insecurities, and how [former suitor Bentley Williams] preyed on that.”

It’s nice to know Ryan Park cares enough after being eliminated to justify Ashley Hebert’s mind frame during her time on The Bachelorette. Yes, we’ll admit, it must be confusing and difficult to make the right choices for yourself while viewers are watching your every move — way to be her cheerleader, Ryan!

Ryan Park also revealed he is not “in love with Ashley” presently and that he now gets the chemistry she had with other guys. “When I was let go, I didn’t really understand, [but] now everything comes clear watching her chemistry with the other guys,” he said.

So, will he be on the next edition of The Bachelor? He simply said, “Maybe!”