The first episode of Project Runway’s ninth season aired last night and the challenge might have been the hardest one yet. Designers received a very unpleasant surprise very early in the morning… and we all know the drill: someone was aufed Heidi-style. 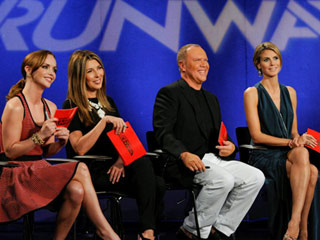 Project Runway Season 9 premiered last night on Lifetime and the first challenge certainly was a harsh wake-up call for many of the 16 designers. Appropriately titled “Come as you Are”, the designers strived to make a lasting impression on Heidi Klum, Michael Kors, Nina Garcia, and special guest judge Christina Ricci. Tim Gunn did his best to give guidance. As usual, one designer could not be saved.

The first half of the show finished up casting for Season 9 as 20 semi-finalists are turned into 16 cast members. Once the cast is finalized, the designers move into their swanky dorms at Atlas in the Fashion Direct of NYC.

Gunn wakes up the sleeping designers at 5 a.m. and tells them there is a “come as you are” party. He asks the designers to roll out of bed as-is and wrap their sheets around them. Becky asks if she can at least put on a bra (nope) and we catch a glimpse of Laura, who nicknames herself “Barbie,” quickly trying to put on her makeup. Gunn and the new cast make their way from the Atlas apartment building through Bryant Park, Times Square, and finally ending up at Parsons: The New School for Design. Once in the workroom, surprise! That’s the challenge for Episode 1: create a garment out of the sheet and PJs they’re wearing. Yikes! Some guys were just in their boxers and a T-shirts. Not a whole lot to work with.

Anya, a a former Miss Universe contestant from Trinidad, made separates: A pair of grey trousers and a midriff-baring Asian-inspired top. Her lack of experience shows when she struggles to thread the sewing machine.

The rest of the designers’ looks range from scraps of fabric on mannequins to semi-finished pieces. Gunn makes his usual appearance and warns both Rafael and Fallene. Gunn’s issue with Rafael is his garment’s lack of character and he urges the designer to coordinate his colorful scarf (currently wrapped up in his hair) into the finished look. Rafael isn’t too sure, very worried he “will look homeless” if he uncovers his hair.

Fallene has cut out a graphic of a clown throwing up rainbows (yes, really) and artfully placed it on the bottom corner of what is an otherwise cute halter dress. While the clown screams personality, Gunn’s not impressed. Fallene keeps the clown on and we commend her for owning her style and aesthetic.

Everyone rushes to finish (they only had until 10 p.m.) and send their models off to hair and makeup.

Anthony: His styling and skirt-and-T-shirt combination wowed the judges. It was a casual look with some edge. Even more impressive: Anthony is colorblind. Wow, could have fooled us! The dark teal skirt and lacey blouse work great together.

Anya: This girl certainly can produce a great outfit for only four months of self-taught sewing lessons. Anya made-it-work as the judge’s confidence was renewed despite their hesitation over her lack of experience.

Bert:  This guy made a super-cute dress with the focal point pattern from his boxers (a bit of an ew factor) but he pulled it off. While Kors hated Bert’s styling, citing “Farrah Fawcett hair,” he did think the “design was fabulous.” We agree, minus the gross factor of wearing a stranger’s underwear. Klum was super happy, “I am in love with this outfit. Sexy, elegant, modern.”

Julie: Her 1990s cargo pants were not a hit. And paired with a super-tight, one-shouldered tank top? The judges were not feeling it. Kors thought the pocket placement was way off (it was right near her nether regions) and the top’s pattern was totally from our sixth grade wardrobe. The pattern even made her original pajamas look kind of ugly.

Rafael: This guy tried but failed miserably. Super high-wasted leggings paired with a cropped T-shirt was unflattering. It actually didn’t look like much of a transformation from his regular sleepwear. While he did incorporate his headscarf, the lack of design was the least of his concerns, since the outfit made the model look bloated and chubby.

Joshua: His three-piece outfit had great intentions but suffered with the fit. Heidi’s first word was “terrible.” Joshua responded by saying he wished the other designers had pulled him aside and told him it didn’t look good. Kors was flabbergasted Joshua would expect help from his fellow competitors. Garcia was unimpressed, to say the least. During judging, Klum felt Joshua’s was truly ugly and Ricci commented that it was “garishly off.”

Everyone loved Bert’s outfit, despite the dated styling, which seemed to draw some negative votes from Kors. Ricci thought the dress was so fabulous, the styling didn’t matter. Bert came out on top and was granted immunity for next week.

Garcia felt Rafael had the taste level was troubling and Kors agreed, marking it was “fashion backward.”

Check out the complete cast of Project Runway Season 9 >>