We got a sneak peek of the designers during the Project Runway Season 9 casting session special, which aired right before the first episode. We break down all the new designers for you and let you know who we think has the talent to make it to Lincoln Center. 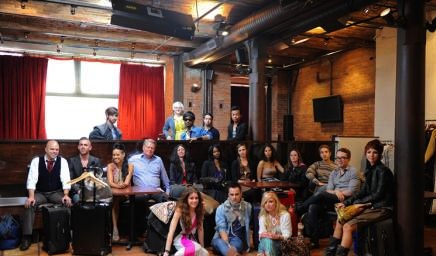 This guy’s a survivor of testicular cancer and started an organization in Louisiana dedicated to changing stigmas about the disease. With that kind of adversity, what’s not to love? His clothes are super-casual yet funky and his Southern accent is fantastic: “Louisiana is stupid-hot, so a lot of the girls wear sheer tops with bras and what not.” This guy was also an intern at BCBG and graduated from Louisiana State University with a degree in fashion design.

This girl’s a former Miss Universe contestant and Miss Trinidad. Her clothes are summer-chic and reflect the lifestyle of her native country. Most impressive is the fact she has very little sewing experience — she has had only four months of working with needle and thread. Although Nina Garcia and Michael Kors have some doubts,  Heidi’s faith pushed her through casting into the final 16.

This girl looks much younger than 38, with her funky blonde hair and light blue streaks. Her casting collections consist of cool wool , tweed jackets and skirts lined with bright blues and hot pink liners. Her goal is to “create clothes with real bodies in mind and that fashion belongs to everyone.” We love her already.

An old-school graduate of Parsons (1977) with an eye for cute and trendy clothes for the young, modern woman, we really like Bert. The clothes look comfy but effortless and elegant. This guy has tons of experience and worked closely with Bill Blass and Arnold Scaasi from Halston. While he’s the oldest cast member, he’s definitely one to watch out for, given his taste level and style.

Bryce Black, 26, from Portland, OR

Bryce loves rock ‘n’ roll and his ideal client is Lady Gaga. He impressed casting judges with his sweatshirt, which fucntionally turns into a skirt. A “wow” piece was what he called “glam rock” designed during his senior year at the Art Institute of Portland. He also showed off his one-legged jean, which the casting judges weren’t too excited about.

Self-taught, this girl seriously doubted her skills and thought she would not make the cut into the final 16. She started designing at age 9, loves Alexander McQueen and has worked as a banker, nanny, chef, hotel concierge and legal interpreter. Her work shows excellent craftsmanship, but the casting judges thought it was a bit old-fashioned and uncohesive.

Danielle has confidence to spare and previously worked for Target as a designer for intimate apparel. She was trained in fine arts and sculpture, which is reflected in the clean lines of her work. She seems like an old, quirky soul with her obsession over antiques and retro clothing

With a pixie cut of gorgeous red hair and a love of tattoos, this girl is rockstar-meets-fashion-design. She was a hairstylist before trying out (and making the show) but held a slew of administrative jobs before getting her big break. Her clothes are vintage with a modern twist, and the casting judges loved her strapless dress trimmed with feathers. Also impressive: She creates her own fabric.

This guy isn’t shy about his Mormon roots but doesn’t believe his religious beliefs keep him from looking sharp. He’s a graduate from the Fashion Institute of Design and Merchandising in Los Angeles. He primarily does menswear and loves a “clean and proper look.”

Already an assistant to major designers, Joshua M. is a graduate from the Fashion Institute of Technology in New York and also studied in Italy… pretty impressive. His ideal celebrity client would be Blake Lively.

She’s a recent graduate of fashion design, having earned her degree just last year from Savannah College of Art and Design. She was an intern at Loki Outwear but has been a chef and server in ski towns across the United States. Her style icon is Madonna and she’d love to design for Chelsea Handler. Her collections are mainly outwear made with wool but are still high-fashion. This mountaineer girl is definitely sophisticated.

While attending the Fashion Institute of Technology in New York, she never graduated (although you’d never guess). Her clothes are super-chic and adorable, not to mention constructed beautifully. Goldson hopes she doesn’t have to do menswear or team challenges, since she’s self-taught. We’re not too worried about her.

A self-described “Barbie,” Laura graduated with a degree in merchandising and textiles. She said she channels Marilyn Monroe and definitely has the spoiled thing down. (She loves vintage fur coats and St. Johns). She made her first garment when she was 9 years old — a pair of PJs.

The youngest cast member stole Heidi’s heart; she even asked him if he used to model which he shyly denied. He’s inspired by London and fell in love with the city when he visited at 16 — apparently the accent stuck — and loves photography. He’s studied design in London and Milan, and thinks his perfectionism may be his downfall this season.

This freelance consultant for design companies and showrooms loves Prada and his dog Mickey. He’s also a skilled carpenter and home furnishings designer. His ideal celebrity to design would be Bjork, keeping in line with his eclectic and edgy style. The casting judges were impressed with his punk rock neoprene (yep, the stuff your laptop case is made of) cropped jacket. He also makes his own prints.

Rafael was on on Project Runway, but the first design challenge sent him home. He studied at America InterContintenal and loves skinny jeans.

Check out our recap of the first episode of season 9, “Come As You Are.” >>