Game show host Alex Trebek is safe tonight after a judge issued a restraining order against his burglar. 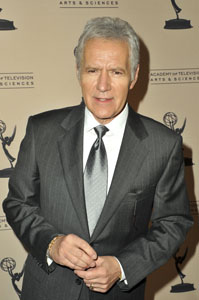 We’ll take “Restraining Orders” for $500, Alex! “Jeopardy“ host Alex Trebek can rest easy tonight now that a judge has issued a restraining order against the woman who robbed his hotel room.

Alex Trebek was robbed Tuesday night in San Francisco and actually tore his Achille’s tendon chasing the bandit, who made off with cash, jewelry and other items.

“We got most of our stuff back, except the one piece of jewelry that I ever wear,” Trebek told the San Francisco’s KGO-TV. “It’s a bracelet that my mother gave me many years ago, so that’s gone. And cash. I figured she stashed it somewhere in the hotel, and we’ll come back to retrieve it someday.”

Click here for more tales of celebrity justice on SheKnows

A judge ordered the burglar, Lucinda Moyers, to stay at least 150 yards from Trebek at all times. The woman already has at least two other residential burglary convictions and if convicted of this crime is facing a long time in prison. She is being charged with felony burglary and receiving stolen property.