We love him as Damon Salvatore; now we love him for his commitment to wildlife conservation. Ian Somerhalder testified before Congress Thursday, proving one person can make difference when it comes to species extinction — but he needs our help too. Read on for all the details.

Just when we thought Ian Somerhalder couldn’t get anymore irresistible, he goes and tries to change the world. 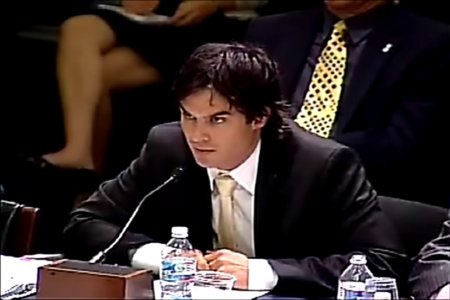 The star of the hit CW show The Vampire Diaries didn’t let a late night of taping stop him from his mission — speaking up for the Multinational Species Coalition.

“Good morning Chairman Fleming, Ranking Member Sablan, and Members of the Subcommittee. I am Ian Somerhalder, an actor and founder of the Ian Somerhalder Foundation, a not-for-profit organization dedicated to empowering, educating, and collaborating with people to help them positively impact the planet and its creatures. I am also a global Ambassador for the Alliance for Global Conservation,” he began.

His passion and commitment continued on, “I appreciate this opportunity to testify before you today on H.R. 50, the Multinational Species Conservation Funds Reauthorization Act. I would also like to take this opportunity to thank the Subcommittee, especially Chairman Fleming — who represents my home state of Louisiana — for the invitation to join you today.”

The star went on to educate those present with staggering statistics pertaining to endangered tigers, rhinos, African/Asian elephants, marine turtles and apes.

Once the facts were laid out he spoke of his fellow activists. “The American people that I interact with through my IS Foundation work do not want to allow this to happen; they do not want to let these species go without a fight; and they see the way in which nature provides for people around the world. This is an issue that Americans care deeply about, and it is critical that the United States, as a world leader and global power, continue to lead the planet’s efforts in global species conservation,” he said.

Somerhalder wrapped up, “Due to instability or indifference in the areas that many of these species call home, for most of them we are the first, last, and only hope for survival. As the ones with the power to make a difference, the responsibility rests with us. It is imperative that we live up to it. On behalf of the Ian Somerhalder Foundation and the Alliance for Global Conservation, I urge the Subcommittee to mark-up H.R. 50 and move to reauthorize this important piece of legislation.”

Somerhalder’s dedication to wildlife conservation hasn’t gone unnoticed. Much of his 976,000 Twitter followers flock to help the star’s foundation proving he is an example of positive change. Watch his testimony now and head to www.isfoundation.com to find out what you can do to make a difference.