We’re not going to lie, seeing Ashton Kutcher front and center in the new opening credits photo for Two and a Half Men kind of makes us giggle. It’s definitely odd not to see Charlie Sheen at the mic, but Kutcher looks at home in the new CBS photos. 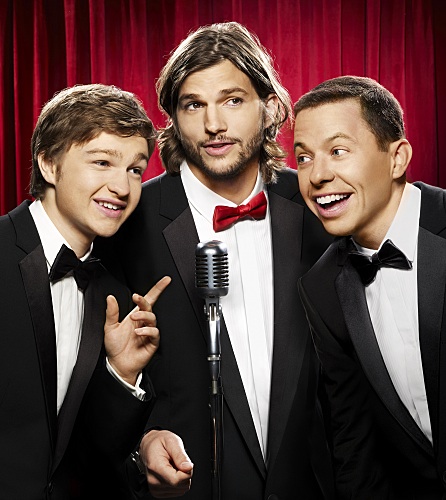 Two and a Half Men doesn’t make its fall debut until September, but in anticipation of Ashton Kutcher’s big unveiling, CBS released the official opening credits photo.

Is anyone else getting really excited for Ashton Kutcher to replace Charlie Sheen on Two and a Half Men just based off of this photo? Remember, when we say replace, we don’t mean the character for those of you just tuning in. It’s being said Charlie Harper (Charlie Sheen) will die a sudden and probably painful death — if producers have their way. Kutcher’s character will likely buy his house.

The new opening credits photo was released by CBS on Thursday (July 28). The new photo shows Ashton Kutcher in the spot once held by warlock Charlie Sheen.

Side note, how hot does Kutcher look in his red bow tie? We can hardly wait to hear him officially go “mennn” or snap his fingers along to the well-known opening theme song.

We also get a glimpse of a nicely aged Angus T. Jones who plays Jake Harper and Jon Cryer, who, of course, everyone knows plays Alan Harper.

This new photo is not to be confused with the naked poster everyone was gawking at recently that’s being used to promote the show. You know, the one where Ashton Kutcher, Jon Cryer and Angus T. Jones stripped and held a sign that said “all will be revealed.”

Two and a Half Men is set to premiere on Monday, September 19 minus Charlie Sheen. Are you excited?