Carey Mulligan might be engaged to her musical man, Marcus Mumford. Are there any truth to the rumors?

Carey Mulligan might be ready to settle down and make beautiful music with Mumford and Sons lead singer Marcus Mumford. The actress, 26, is reportedly engaged to her boyfriend of five months, according to British newspaper The Sun. 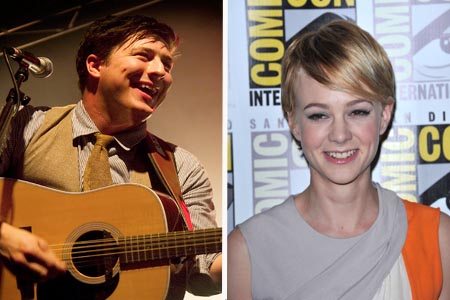 The Drive actress was even spotted showing off her ring during her stay at the $400-a-night Babington House in Somerset, England.

“Carey looked like the cat who had got the cream. She was wearing a beautiful ring and didn’t seem to mind who saw it,” an onlooker told the tabloid. “They were stuck to each other like glue. She was doing most of the talking and he was hanging on her every word.”

Mulligan met her musical boyfriend in Nashville in February, just a few months after she broke off her relationship with her Wall Street 2: Money Never Sleeps co-star Shia LaBeouf.

“Marcus invited Carey to watch him play a secret show in the basement of his friend Mike Harris’ home in Nashville. She sat in the front row and while he was singing Marcus looked down at Carey and she blushed. It was clear they had chemistry,” an onlooker told the Daily Mail after they met.

Five months seems a little soon — we always thought the petite actress seemed like a level-headed girl, so we’re hoping it’s a rumor.

You’re young, Carey: Give it time!