Harrison Ford confronted an old friend on Jimmy Kimmel Live last night — but by the looks of it these former partners are now enemies.

Abbott and Costello, Sonny and Cher, Batman and Robin, Han Solo and Chewbacca — they count themselves as some of the greatest duos in entertainment history. 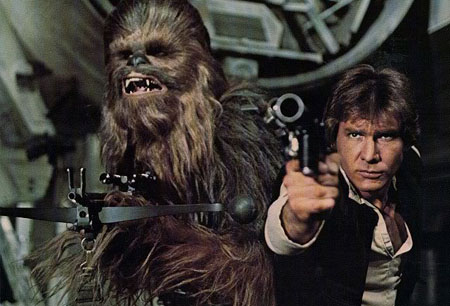 But now it appears that the pair who battled the Dark Side together are separated by a wide gulf that not even a heartfelt apology can fix.

Harrison Ford, who played Han Solo in the three original Star Wars films, got into it with his old costar and buddy Chewbacca while in makeup getting ready for his appearance on Jimmy Kimmel Live. Chewbacca was obviously trying to apologize for some long-ago transgression, but Ford just wasn’t havin’ it.

What could be so bad that these longtime friends can’t kiss and make up?

Ooh, sounds like we finally know what caused the breakup of Harrison Ford’s first marriage!

Ford was on Jimmy Kimmel Live to promote his new movie Cowboys & Aliens.