Paz de la Huerta has her own theories about what brought Amy Winehouse to the destructive behavior that ended her life. Is the media the one to blame? 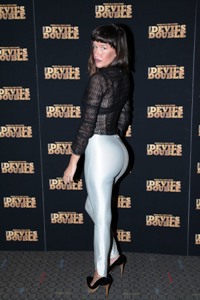 Paz de la Huerta sees a similarity between Amy Winehouse’s death and her upcoming movie. The actress, known primarily for her role on Boardwalk Empire, thinks the media is to blame for the singer’s self-destructive behavior.

Paz de la Huerta, pictured here at Monday’s premiere of The Devil’s Double, is working on her directorial debut. The actress’ own version of The Red Shoes fairy tale is set to star the one and only Paz de la Huerta.

“I’m finishing directing a film of mine,” the 26-year-old explained to the New York Observer. It’s “about a woman who’s unique, and lives in a small village, and is ostracized for being different, for being talented, and then she makes a horrible mistake and because the people in the village are so — you know — jealous of her, they don’t forgive her.”

Paz de la Huerta, who has struggled in her own encounters with the media, says this is a “very important story to tell, especially in an age when the media has to take responsibility for their actions.”

“Look what just happened to Amy Winehouse!” she continued. “Maybe had she not seen so many bad pictures of herself she would have gotten more self-esteem, and not been so self-destructive.”

What do you think of Paz de la Huerta’s theory on Amy Winehouse’s death?