Lady Gaga chatted with JoJo Wright at KIIS FM in a very candid interview in which she revealed how she stays slim and trim, as well as her thoughts on the death of Amy Winehouse. 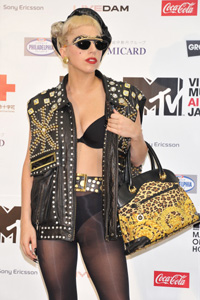 Wearing a leopard print dress and dark sunglasses, Lady Gaga sat down with KIIS FM’s JoJo on the Radio to answer questions from fans. Gaga holds nothing back, and talks about everything from her (unhealthy) diet plan to getting married and settling down.

Facebook and Twitter fans had a slew of questions for Lady Gaga, and one fan asked how she stays in such perfect shape.

“No, just no food,” she replied, sipping on tea.

“She is looking at me with a straight face, so I guess it’s true,” said JoJo.

Investigative journalist Ian Halperin recently claimed that Lady Gaga has an “unhealthy obsession” with her body.

“Those who have worked with her on tour reported to me that Gaga barely ate for weeks at a time to fit into her costume,” he said. “She is sick and obsessed with her weight.”

Another fan asked if she is dating anyone and if she plans on getting married and having kids. “No, not dating anyone,” she says. “I don’t know if I’ll get married. If I find my true love I will.” She didn’t mention anything about kids, but moving on…

Another fan said she needs to get more rest between shows because she is overworking herself.

“Listen, I didn’t write music to sit next to a palm tree and drink pina coladas,” she responds. “I really love what I do. I’m not tired or overwhelmed.”

JoJo reads a question from a listener who notes that Born This Way has some religious undertones and asks if she considers the album religious.

“I wouldn’t say it is religious,” she replies. “It is an approach to culture and pop culture… not a particular religion or set of beliefs, but finding liberation through individuality — that is the religion of the album.”

When asked about the death of Amy Winehouse, Lady Gaga says she was a fan. “I didn’t know Amy. I just loved her so much and I was such a huge fan. I was a go-go dancer in New York when Amy was really big so Amy gave me hope.”

Want more Lady Gaga? Listen to her talk about the emotional story behind Edge of Glory.