Summit Entertainment has released the first full poster for The Twilight Saga: Breaking Dawn Part 1. It’s a special Comic-Con edition that features the Cullens, including the newly married Edward and Bella and the wolfy thorn in their side — Jacob Black.

In Breaking Dawn Part I, Edward (Robert Pattinson) and Bella (Kristen Stewart) jump the broom to become husband and wife and not everyone’s happy about it. Jacob Black (Taylor Lautner) has some serious resentment to deal with, which lucky for us means more drama. 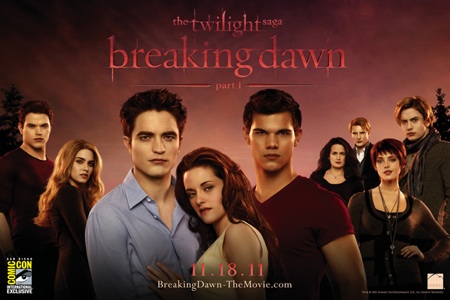 This installment will also feature one of the most anticipated scenes from the book, which takes place the night of Edward and Bella’s honeymoon. The two lovebirds will finally get it on and from what we’ve heard it’s quite a rip-roaring experience.

And if you think that’s intense, it’s nothing compared to what happens next. If you haven’t read the books or seen the first trailer (spoiler alert): Bella gets pregnant with a half-vampire baby that’s super strong and growing at a rapid rate.

There’s much more drama and angst waiting for us this time around. The Twilight Saga: Eclipse has nothing on what Breaking Dawn is bringing to the table.