Scarlett Johansson has turned down an invitation to the Marine Ball — but she sent the soldier a lovely parting gift to ease his disappointment. 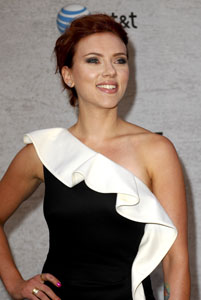 Joining the ranks of Mila Kunis, Justin Timberlake and Betty White, Scarlett Johansson is the latest celebrity to receive a video invitation to the Marine Corps Ball — but like Betty White, Johansson said no thank you.

Sgt. Dustin L. Williams posted his video on YouTube like the others, saying, “Recently I noticed in the media that a lot of Marines have been asking celebrities to the ball. So I was thinking, if I could ever ask anybody to the ball, who would it be? I mean, obviously they need to be beautiful, classy… who would it be?”

“Scarlett Johansson, it would be my pleasure to take you to the Marine Corps Ball.”

Using the ol’ “prior commitments” excuse, Johansson said no — but has sent the Marine a boatload of booze so he can drown his troubles.

“I feel incredibly honored to have been invited to the Marine Corps Ball by Sgt. Dustin L. Williams,” Johansson said. “Not only does Sgt. Williams deserve recognition for his bravery, selflessness and dedication to the United States and its people, but he also displays a cheeky talent for filmmaking.”

“Sgt. Williams unfortunately, due to prior commitments, I will not be able to attend the ball with you this year, but I am sending you a case of Moët and Chandon with gratitude. In my absence, I raise a glass to you and all the men and women of the U.S. Marine Corps, past and present, in thanks for your continued commitment to preserving the safety of our nation.”

Check out the video of Scarlett Johansson’s invitation to the Marine Corps Ball:

read on for more scarlett johansson