Ryan Gosling is having a heck of a year! The first trailer for his upcoming film The Ides of March has hit the net and it’s as powerful as he is talented. George Clooney directs, co-wrote and co-stars in this political drama that tackles corruption and betrayal. 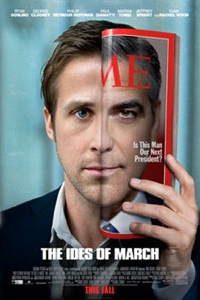 The Ides of March centers on a young press secretary (Ryan Gosling), who’s helping an honest governor (George Clooney) pave his way to the White House. But despite the duo’s good intentions, politics is a dirty game and no one can stay clean forever.

Paul Giamatti stars as one of Clooney’s many adversaries who plants seeds of doubt in Gosling’s head. In other words, he wants him to drop that zero and get with a hero. Will Gosling’s character switch to the other side? You’ll have to watch the movie to find out.

The Ides of March is another notch on Gosling’s 2011 movie belt, which also includes this week’s Crazy, Stupid, Love and Drive with Carey Mulligan and Christina Hendricks. Gosling’s living the working actor’s dream and it looks like The Ides of March could be another Oscar contender for him.

The Ides of March trailer