Kat Von D has a lot of explaining to do after storming out of a Good Day LA interview and then Twitter-ranting about the incident. See what the LA Ink star had to say in a long Facebook note of explanation. 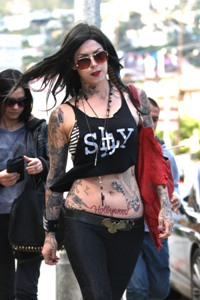 Kat Von D took to Facebook on Wednesday evening to discuss her earlier behavior, storming out of a Good Day LA interview. In a note titled “What can I say? I suck,” the former girlfriend of Jesse James reflects back on the rollercoaster ride of the past year.

“Today felt pretty impossible. Most of the times, regardless of what’s going on around me, I’m usually strong enough to not let things get to me like this.

But today there seems to be no way of escaping my thoughts.

Most of the time I’m good at rolling with the punches when things don’t go ‘as planned.’ But somehow, I allowed today to get the best of me.

None of this happened over night and I guess most of the time it doesn’t. But we are all master of our own reality and whatever is ‘happening to me’ is no ones ‘fault’ other than my own.

The accumulation of things this past year have been challenging in so many ways, but for the most part I found it easy to stay positive through it. At times I even surprised myself at how resilient I was to a lot of these challenges…

There was my new relationship with Jesse, which regardless of how happy it made me, sprung a lot of negativity from the outside world. Then the 2 month book tour, not to mention my house burning down half way through the tour…

Taking on another season of filming the show during all of this, plus a million other things to add to the list…

None of the above gave me reason to complain, and I didn’t, and still don’t — not even losing my cat in the fire. As crazy as it sounds, all of it brought me a great deal of reassurance that I was on the right path…

I mean, if all of this would of taken place 4 years ago before I decided to get sober I would have easily been the worlds biggest train wreck. Instead, dealing with all of it through acceptance of what is, and staying as present in the moment as possible, was the only way I was able to learn so much…

In my relationship I never before felt as solid and strong — even though the world said different by all the criticism.

Lost a lot of friends, and even caused turmoil within some of my family members because of the bullshit the media put out there… Some fans even changed their perception of who they thought I was…

All of this just motivated me to stay even more grounded and to love whole-heartedly without judgment.

At one point I remember feeling so saddened by the way people said the most hurtful things, (as much as I did my best to ignore it). It felt like it was just the two of us against the world. I think it’s safe to say that a lot of times that would bring us even closer.

Knowing that someone loves you for who you are and that they gain nothing from you other than the joy of being loved unconditionally is a good feeling.

But life has an amazing way of reminding you what truly is important and at the end of the day, none of what the outside world has to say carries any real weight when it comes to matters of the heart.

Fast forward through this year of transition, and things evolve — some in more positive ways than others. But all with life lessons at the end of them.

Today was really hard for me. And no ones to blame other than myself.

Never planned on walking away from this relationship, let alone the timing of things.

Never was good at being anything other than myself either. And as much as I’d like to picture me being this strong, independent woman, the truth is most of the time I’m not as strong as I’d like to be — but I’m still trying.

Although my intentions were never to offend or hurt anyone’s feelings, this isn’t an apology for walking out on a silly morning show interview this morning — and this isn’t an attempt at justifying anything either. I don’t expect people to understand, just like I can’t expect myself to be able to please everyone at all times.

Tomorrow the new season of LA Ink starts and I admit I’m not strong enough to do all the press I committed to doing for the show. Today was a perfect example of that.

I’m not going to flatter myself in thinking I’m interesting enough for the press not to pry into gossip-related questions so its unfair of me to expect them to respect that… but even though it’s not in my nature to cancel on people, it IS in my nature to admit when I’m weak.

Ratings.
Sales.
Publicity.
The amount of followers I have on twitter.

None of those things matters to me. Watch the show or don’t watch it.

Whether people tune in or not doesn’t change my best efforts or the quality of what I do, because when you make something for the sake of putting good out into the universe, the payback comes from a much more fulfilling place than any man made form of payment.

What do you make of Kat Von D’s Facebook letter of explanation?