Steve Carell stopped by Late Night with Jimmy Fallon and it turns out the host was able to dig up some old footage of the duo taking part in a late night interview from the talk show Other Voices. Keep reading to see the hilarious video.

With Steve Carell‘s days on The Office behind him, he’s been promoting his new movie Crazy, Stupid, Love (in theaters July 29) which boasts a huge cast including Emma Stone, Ryan Gosling and Julianne Moore. 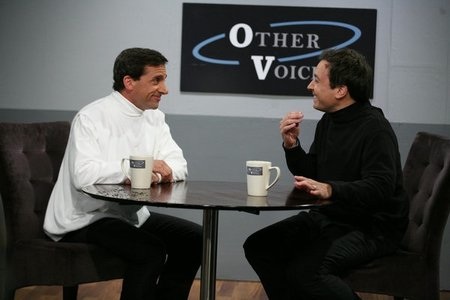 Steve Carell stopped by Late Night with Jimmy Fallon to promote his new film and we found out an interesting piece of information.

Remember when Cameron Diaz stopped by the show and we found out she did an interview on Jimmy Fallon’s old Canadian talk show Other Voices? You know, the one that only lasted two weeks and broadcasted at 3 a.m. It turns out Steve Carell also was a guest on Fallon’s old show.

We should only be so lucky that Jimmy Fallon’s team was able to salvage some footage of the interview with Steve Carell. In all their turtleneck glory, ladies and gentlemen, we give you Steve Carell and Jimmy Fallon in Other Voices.

We’re not sure who was the better guest — Cameron Diaz or Steve Carell. Cameron Diaz just owned her Other Voices interview and that turtleneck, but Steve Carell was good too. Let’s have a look at Cameron’s video and you guys decide.

So, which Other Voices interview did you like better — Steve Carell or Cameron Diaz? Tell us, we want to know.