Olivia Wilde says she has gained some weight since her divorce from Italian prince Ruspoli because she medicates with food, not crack cocaine. 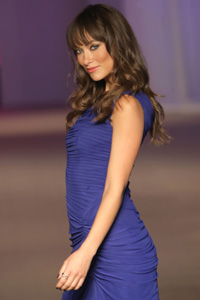 It doesn’t look like Olivia Wilde has packed on the pounds to me, but the 27-year-old tells Marie Claire that since her divorce this year from her husband of seven years, prince Tao Ruspoli, she has gained weight.

“I got a divorce and self-medicated with food,” she tells the magazine. “But I figure that’s better than self-medicating with crack cocaine.”

In fact, she told Nylon magazine she can no longer fit into her favorite skinny jeans!

Wilde, who is starring in the movie Cowboys & Aliens with Daniel Craig and Harrison Ford, also comes clean on dating. She has been linked to every hot single stud in Hollywood, including Bradley Cooper, Ryan Gosling and Justin Timberlake.

“I see the whole thing like someone who’s been in a coma and I’ve come out like, wait, people text message? They text love? How do you text about love? Three Xs and a smiley face? Emoticon? Deal breaker!” she tells Nylon.

She confesses that dating in the spotlight is tough. “It makes dating harder,” she tells Marie Claire. “You go on one date and everyone thinks you’re dating. It sort of puts pressure on this little sprout, and tramples it. If someone becomes involved with you, they know they will be photographed and written about and investigated in some way.”

One more fun fact revealed by Nylon: Her real name is Liv Cockburn — and I can see why she changed it!