Steve Carell has been many things to many people throughout his career — from his improv comedy beginnings at Second City in Chicago and serving as a “news” correspondent for Jon Stewart’s Daily Show to his star-making turn on The Office and film work in Anchorman, 40-Year-Old Virgin and Despicable Me.

In Crazy, Stupid, Love, also starring Emma Stone, Ryan Gosling, Julianne Moore and Kevin Bacon, Steve Carell is tackling something completely new — the romantic lead. Considering everything else Carell has touched has turned to gold, don’t bet against the film being a surprise summer hit that should not be a shocker given its cast, concept and impeccable marketing campaign. 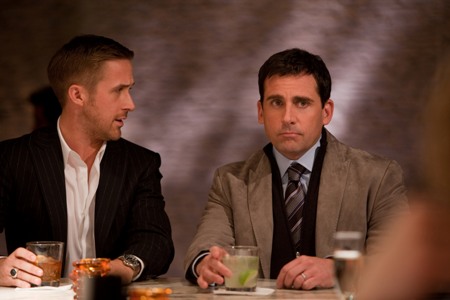 Carell portrays a newly divorced man who thinks he has lost everything, only to discover the future is a story yet to be written. The actor was in New York City this hot July afternoon and the sense that he possesses career-spanning pride in his current role is a gross understatement. He is equally funny, fierce and yes… even fashionable in Crazy, Stupid, Love.

SheKnows: What was the most enjoyable aspect of making Crazy, Stupid, Love?

Steve Carell: They were not photoshopped [laughs]. I can’t tell you how many questions I’ve received about his body — which frankly makes me feel terrible. I get a lot of this, “When are we going to see your abs in a movie?” And, clearly they’re just making fun of me. Honestly the most fun I had was working with Ryan and Julianne specifically because I had most of my scenes with the two of them. They’re wonderful actors and I hadn’t worked with either before. I think when you work with people who are that good, you are inherently better.

SheKnows: Reading the script, what struck you the most?

Steve Carell: I thought it was very human. And I thought it had real characters going through interesting life experiences. Ultimately, I thought it was really funny. There are a lot of twists and turns in the movie as well that I did not see coming. That was what I was attracted to. In the film’s first couple of minutes, my character finds out that his wife wants a divorce and he jumps out of a car. [Laughs] Reading that part, where he jumps out of the car, really piqued my interest. I’d never seen anything like that in a movie and it said so much about that guy. He’s unwilling to engage with this woman and really took it to the point where he would rather risk life and limb to get away from even discussing it. That spoke volumes to me. 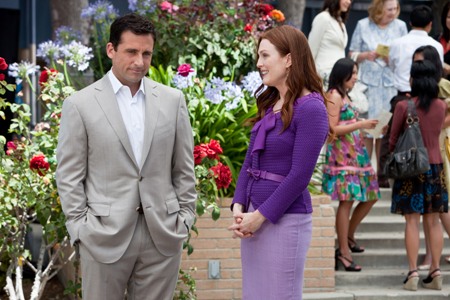 SheKnows: Did you pick up anything in the film that you plan on bringing into your own marriage?

Steve Carell: I will never jump out of a car if my wife wants to discuss something serious. It’s funny, I think it’s kind of reverse. I think I take and apply things that I’ve learned in my life and apply them to scripts for movies or TV. I certainly haven’t gone through this scenario with my wife but from what I’ve observed in life — it was important to me that a couple on the brink of divorce that there’s culpability on both sides of the equation. That was really important. There is generally speaking not a villain in the scenario. Look, honestly, my learning from this film goes back to Ryan Gosling’s abs. In order to look like that… you really have to work at it. And, you have to be Ryan Gosling.

SheKnows: How do you keep your kids grounded in LA and do your kids think you’re funny? 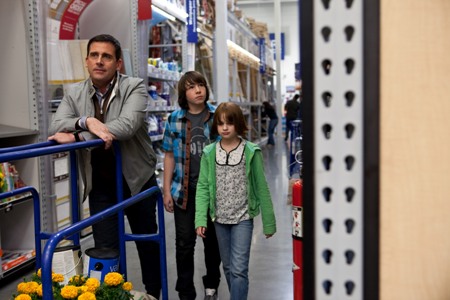 Steve Carell: I think my kids are much funnier than I am. My wife and I, and sometimes they say things that are so funny, we don’t necessarily want them to know that it was funny. I don’t want them to know that was a funny thing to say because then they’ll keep saying it [laughs]. They just think of me as a dad. I think I’m a fun dad. But, I’m not a comedian dad. I’m not a performer father. I want to define that relationship with them. In terms of grounded in Los Angeles, the toughest part of that equation is when you drive by a billboard with your face on it. They look quizzically at it and don’t really understand why there is a picture of you on the side of a bus or the side of a building. I don’t want that to interfere in my relationship with them. I just want them to think of both of us as their parents and what I do is a job and not have it define me or them.

SheKnows: What traits in your kids have you noticed as an apple not far from the tree moment?

Steve Carell: You know what, they have something both my wife and I have, is a sense of irony. I think that’s a very advanced concept for a seven- and 10-year-old. They not only understand irony, they employ it. Not cynicism, but irony, which I think is a really important distinction.

SheKnows: Animated movies such as Despicable Me, do you have any more of those on the horizon?

Steve Carell: There will be a second Despicable Me, as a matter of fact. I will be taking a look at the script when I get back to Los Angeles. I should start filming on that this fall.

SheKnows: What was your first job as an actor?

Steve Carell: My first paying job was in Chicago, the touring company of Second City. It was in 1988, really, how I viewed my success as an actor. I think of that when I became a successful actor — when I was able to quit my job waiting tables and act full time. I was making almost no money, but it was enough to live on, that was my determination that I had made it.

SheKnows: Crazy, Stupid, Love is a real parents’ night out movie, date movie, whatever label you want. Whether it’s your starring in Date Night or your experience as a husband and a dad — do you think it’s beneficial for parents to get out? 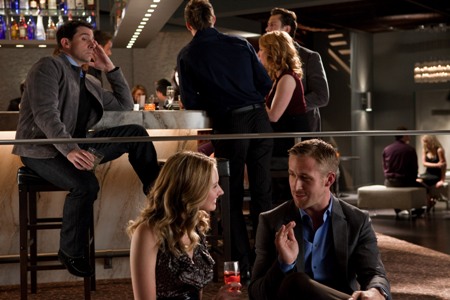 Steve Carell: I think it’s an excellent date night movie. I completely agree. I think in order to be the best parent, and to be the best spouse, you have to have your own life that is different and separate from your other lives. You have to [laughs] — I’m not saying have a secret life! — you have to have your own interests. Ultimately, I think a person has to feel good about themselves in order to be a good parent or spouse. This is something my wife and I learned raising our kids, is that the impulse is to put every effort into your children. It’s the most important thing in your life. But, if you forget to take care of yourself, if you forget to take care of your spouse and your relationship, then you are not going to be as good of a parent. You won’t be as happy. What’s great about this movie is it’s really funny. There are moments in this movie that will make people laugh for minutes. It’s also a very real movie. There’s a lot of accessibility to it.