NBC’s new entry into the fall television lineup, The Playboy Club, is getting tons of buzz, without anyone having seen it yet. The PTC (Parents Television Council) has urged NBC to pull the plug on its newest show, citing “salacious content.” Yet, there is one twist to this story, no one at the PTC has actually seen the show!

Mega-controversy is surrounding the new NBC television show, The Playboy Club, as the PTC continues its ban on both the show and the network. The show, which features Amber Heard, Naturi Naughton and Laura Benanti, focuses on the lives of the famed bunnies, as well as the clientele of the original Playboy Club, circa 1960. 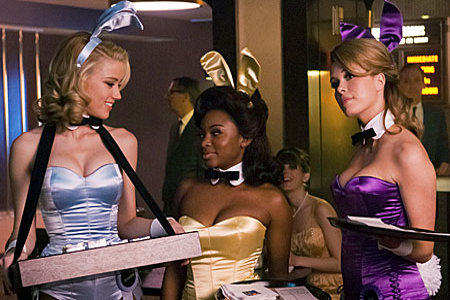 The Parents Television Council has urged NBC affiliates to not air the program, through a letter, which in part states, “[I] urge you to preempt the program in your community. If you proceed with plans to air this series in your community, be assured that the Parents Television Council will be carefully reviewing every episode and will urge its members to file complaints with the Federal Communications Commission about any content that may be in violation of broadcast decency laws.”

In a statement, NBC responded, “The content of The Playboy Club will be consistent with broadcast network standards and the show will carry an appropriate rating.”

Director of communications and public education Melissa Henson acknowledged that neither she nor anyone at the PTC had actually seen the program. She told the website Zap2it, “NBC isn’t eager to share that with us.”

The show tells the backstory of three bunnies who work at Hugh Hefner’s famed Playboy nightclub of the 1960s. The Playboy Club was a nightclub that was started by Hugh Hefner in Chicago, and with its popularity, branches soon opened in most major cities, including New York and Los Angeles.

Mr. Hefner said in an interview about the show, “I think the show is conceptually going to take you back to a magic time. It’s a time of retro chic, a time of the rat pack, it was the beginning of so much for America and for Playboy. What I didn’t realize was the Playboy Club turned the magazine into something iconic. The 1960s was a remarkable time of growth for Playboy the magazine, the clubs and the bunnies. Everybody loved the bunnies. The magazine, the club and the mansion were all located close to each other in Chicago, so they were all intertwined.”