Jeopardy! host Alex Trebek battled a female burglar in the middle of the night. 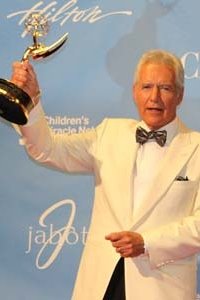 The answer is breaking into Alex Trebek’s hotel room and trying to steal from him.

That’s what happened Tuesday night at Trebek’s San Francisco hotel room when a female burglar broke in at 2:30 a.m. and woke Trebek and his wife, according to the Bay Citizen. The longtime Jeopardy! host then chased the intruder, fell down and tore his Achilles heel before hotel security nabbed the gal crook.

Trebek, 71, then filed a police report.

“It had nothing to do with him being Alex Trebek,” said Stephanie Montgomery, a spokeswoman for National Geographic, to the Bay Citizen. “She wasn’t a stalker or a fan or anything like that.”

Trebek, who suffered a mild heart attack in 2007, was in town to host the National Geographic geography world championship, which took place Wednesday morning at Google’s headquarters in Mountain View.

“He was a total trooper and agreed to stay — was happy to stay — for rehearsal yesterday and the event today,” Montgomery said.

He sounds like a champ to us. Attempts to reach Trebek’s camp for an update on his leg and heel were unsuccessful.