Executives at major media outlets choked on their spritzers and diet cokes when Casey Anthony’s lawyer informed the press that his client will take absolutely no less than 1.5 million dollars for her first sit-down interview. The joke’s on the Anthony clan, though, as sources from major networks say she’s not going to get anywhere near that amount, if anything.

Ah, Casey Anthony. The notorious defendant who remains sealed from the public until she decides to give her side of the story may be waiting a very long, long time. 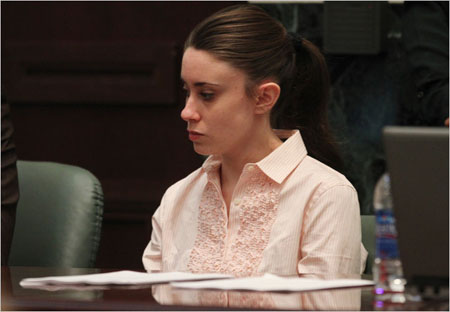 The publicity circus that surrounds the tragic case has given many to believe Anthony will easily be able to profit from her instantaneous thrust into the spotlight three years ago. Book deals and Lifetime movie specials are just a few of the rumored deals reported to be in the works. However, before a has-been starlet can land the made-for-TV movie role, the first step is a major interview with one of the major networks. Think Diane Sawyer, Katie Couric, Matt Lauer, etc. Oprah could even come out of retirement for this one. So Casey Anthony would obviously like to cash in on her potential demand. The only problem is Anthony may be the only one convinced of her value.

The Big Guys Flat Out SaID No

ABC released a statement earlier this week explaining they would never directly pay for an interview. NBC also strongly denied rumors they were courting Anthony but they admit to paying for Casey Anthony’s defense team’s hotel room during a meeting.

There is Money in the Fine Print

It’s not as clear cut as it seems, though. Networks do pay for licensing fees which allow them to show footage of home video and pictures. It’s kind of hard to do an interview without those fillers.

No Way Anthony will get 1.5 Million

However, if the major networks do agree to shell out some big dollars for licensing fees, many believe there is absolutely no way it will be close to a million dollars, let alone 1.5 million. So far, the biggest payout has gone to Anthony’s parents who received $200,000 from ABC for licensing rights three years ago when the Anthony case was picking up significant coverage. Any amount given directly to Casey Anthony will be heavily scrutinized, and given the intense negative public opinion of her, networks are likely to shy away rather than move forward.