Bam Margera is in a world of hurt after challenging his neighbor to a race up the stairs. Care to guess who won?

In true Jackass style, Bam Margera is showing off evidence of a stunt gone awry. The 31-year-old posted the following picture to his Twitter account, revealing a few details of how the friendly race turned into a hospital visit. 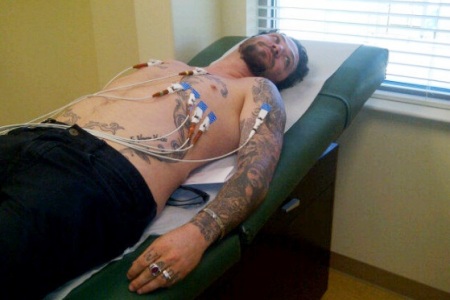 TMZ reports that Margera says he was racing his neighbor up a set of stairs… and promised the guy he could have one of Bam’s skateboards if he won — but, “Somehow I wound up tumbling down the stairs.”

Oddly enough the Jackass star had successfully completed a skydive less than 24 hours before the stair race and ensuing rib-cracking fall. Perhaps Bam’s luck had better timing than it seems at first glance?

A tweet from friend @RedMohawkGeoff reveals Bam Margera is the unlucky owner of four broken ribs. No slowing down for recovery time, however, the pair is “now goin to visit Lil Wayne” who has a concert tonight in Ohio.

No word yet on if the neighbor, presumably victorious, was rewarded with one of Bam Margera’s skateboards.

Any sympathy from you for Bam Margera’s broken ribs?