A little while back we got our first glimpse of Oscar nominee Jennifer Lawrence as Katniss in the upcoming film The Hunger Games. Now we’re getting a look at Josh Hutcherson as Peeta and Liam Hemsworth as Gale. Check it out below. 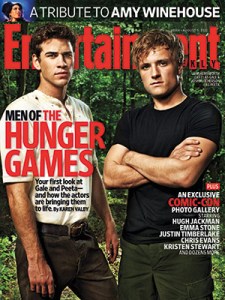 The Hunger Games might be one of the most anticipated films out there. It seemed like there was new casting news every day for a few months there. It was so hotly debated that even Jennifer Lawrence’s natural blonde hair was an issue. (She dyed it brown for the role.) Well, we’ve finally gotten a look at the boys.

If you’re not familiar with the series by Suzanne Collins, it takes place in post-apocalyptic North America which is now called Panem. A powerful government rules and to keep the populace in fear, once a year they hold a televised event where one boy and one girl from each district fight to the death. Even children are not immune to the power of the Capitol. No, this is no sweet little Disney film.

What do you guys think of the casting in this film? How many of you have read the books?

The Hunger Games will hit theaters on March 23, 2012. Meanwhile, you can check out the issue of Entertainment Weekly on July 29.