Chloe Lattanzi, daughter of the decades sweet Olivia Newton-John, is pushing boundaries and buttons by depicting numerous self-harming acts in her Play with Me music video. As an artist, does Chloe have the right to do as she pleases?

Olivia Newton-John’s daughter Chloe Lattanzi has some explaining to do. The singer, whose latest video Play with Me portrays the 25-year-old in a number of self-harming scenarios, is getting an earful from officials at the Australian Council for Children and the Media. 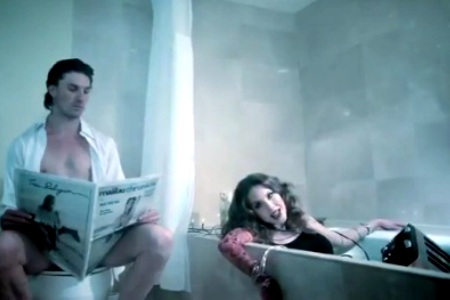 Chloe Lattanzi’s Play with Me video features the daughter of Olivia Newton-John in a bath full of electrical appliances with scalds on her arms, slicing her wrists and holding a gun to her head. Despite a warning label preceding the video clarifying that it is “intended for entertainment purposes only,” Australian officials fear it glorifies “harmful behaviors.”

The group’s president, Elizabeth Handsley, tells the Sydney Morning Herald, “I think it’s sad that this young woman has such a need for attention that she needs to push the envelope of good taste and appropriateness this far.”

Handsley continues, “This simply glamorizes a range of harmful behaviors and does nothing to help empower young people to cope (with) relationship problems.”

In defense of her Play with Me video Chloe Lattanzi says, “It’s purely just for artistic value. I don’t want to kill myself, I don’t want to die, I don’t want to kill anybody, I don’t want anyone to die, it’s all just in the name of fun. Some people are taking it a little bit too seriously and getting all preachy and all this [expletive]. But it is an artist’s job to challenge ideas. I have a lot of gratitude, though, for your attention to me. Bring on the negativity because I am a good person.”

Wonder what Olivia Newton-John thinks of her daughter’s art?

Do you think Chloe Lattanzi’s Play with Me video goes too far?