Funnyman Steve Carell is known for his tongue-in-cheek approach to humor. But playing a romantic lead? That’s something else entirely, and the one person who thinks it’s a real crack-up is his wife, Nancy Walls, whom he married 16 years ago after the two met while working together in the famous Second City Comedy Troupe. 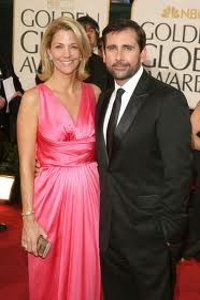 Steve Carell is finally getting the chance to star as a romantic lead, after years of being a funny guy, in the film Crazy, Stupid, Love. In the film, he plays a devoted family man who tries to school his son in the ways of love as he tries to win back his estranged wife, played by Julianne Moore.

But the one person who is quite amused by this turn of events is his wife Nancy Walls.

Said Carell to USA Today, “My wife thinks it’s hilarious and strange that all of a sudden, I’m not only performing with these women but am also a love interest. It’s astounding to me!”

Best known as the unflappable Michael Scott in The Office, Carell found his way into the limelight by way of one quirky role after another, culminating as the lead in the flick The 40-Year-Old Virgin.

The couple has been married 16 years, happily to be exact, and Carell says there is no secret to their state of wedded bliss. His advice is pretty matter of fact as well.

“There is no secret. Some of it is just luck of who you end up with. I was very lucky to marry the person I should have gotten married to.”

Carell met his wife at an improv class while he was an instructor in Chicago’s famed Second City Troupe. She tended bar and the two would talk, and their romance blossomed. “We really talked around the topic of going out for quite a while,” he revealed. “I’d throw out little hints like, ‘Boy, you’re the kind of person I’d like to go out on a date with.’ And then we’d end up not going out. It took a while.”